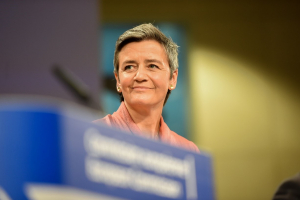 The International Conference on Information Systems (ICIS) 2022 Conference Committee is pleased to announce Executive Vice-President Margrethe Vestager as the recipient of the AIS Leadership Excellence Award. The AIS Leadership Excellence Award, established in 2015 by the AIS Council, is presented annually at ICIS. Ms. Vestager, who has demonstrated exemplary leadership and innovation in the use and development of information systems, is the keynote speaker in Copenhagen.

Ms. Vestager began her career in politics as the Head of Section at the Ministry of Finance in Denmark from 1993-1995 after earning a Master of Science in Economics from the University of Copenhagen. She served in other public service roles until 1998 when she became the Minister for Education and Ecclesiastical Affairs (1998-2001). She has held other Danish government roles, including Member of Parliament and Political Leader for the Social Liberal party, Minister for Economic Affairs and the Interior, and Deputy Prime Minister of Denmark.

In 2014, she was appointed to the role of European Commissioner for Competition, and in 2019, she was appointed to the newly developed role, Executive Vice-President of the European Commission for “A Europe Fit for the Digital Age.” As the European Commissioner for Competition, she aggressively pursued investigations and litigation against major companies, including technology companies, for antitrust violations and unpaid taxes. Ms. Vestager has been named as one of the World’s Top 50 Women in Tech (2018) and Europe’s Top 50 Women in Tech (2018) by Forbes. In July 2022, two regulations developed in part by Ms. Vestager, the Digital Services Act and Digital Markets Act, were adopted by European Parliament. These acts protect users’ rights, create open markets, and require technology platforms to take more responsibility to address issues such as hate speech, data sharing, and promoting their own self-interests.

Executive Vice-President Vestager is a muse for the protagonist in the television series, Borgen, which has been widely watched in Denmark, on the BBC, and on Netflix. She is married with three children and lives in Bruxelles and Copenhagen.